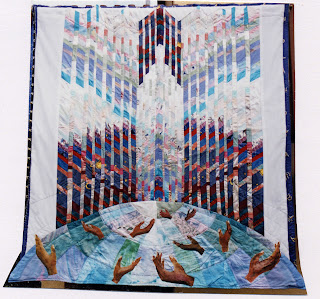 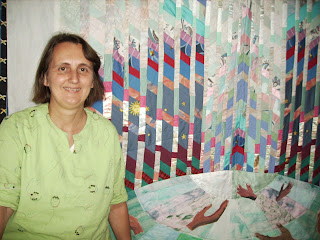 It was in the late 90ties when my brother called, and said, he's going to need a huge quilt "prayer". Immediatly I had in mind a quilt, which I've seen in Lyon, the technique is called Barghello. Internet was not, like it is today, but already we made friends with our action round the globus to make YEAR 2K quilts. So I found a friend there, which explained me in a 1 week action, how to make that thechnique and special the one I had in mind! Finally I understood, what she tried hard to make me understand, and I could work. 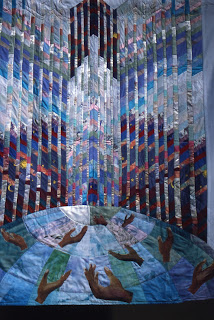 The wolrd is made from painted materials - and the hands I painted in acryl and appliqueed them. I remember the day, when it was too much ice on the streets, so we were not able to drive to the church. My 3 kids and me were sitting in the room and I asked them to lift up their hands, so I could draw them, as they pray. Also the 3 years old youngest son. Every time he saw that quilt he explained everybody: Those are my hands! 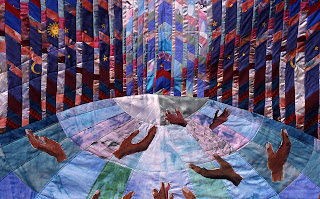 My new shop in DaWanda!

Brigitte Brenda
Since I am 12, I am studying art, painting and drawing. I wrote books, and did live several years in the mother of art-countries, egypt. When I raised my 3 kids, I sewed nearly all clothes myself, I learned sewing in school, and from my mother, she was a tailor. Since 1995 I am Quiltmaker: I just learned the traditional style, which I found, was necessary, but changed veray quick toward contempory art. I learned from international teachers to express myself with materials, painted them, draw, and worked with airbrush. In a lot of single- and groups exhibitions in germany and all over the world I could show my quilts. The Quilt "Hatschepsut" won a price in Austria. This Quilt went along with "Roots of Racisme" through North-America until Pakistan. My quilt "Mime" was a cover on a Patchwork-Gilde journal. In a Patchwork-Gilde meeting, Helmbrechts, Germany, I had a single exhibition inside a church, which had 4000 visitors. For my brother, who is a musicians, I worked out Quilts like "Joy", "Prayer" or "Jesaja". They hang over the orchestra in several concerts in South-Germany...