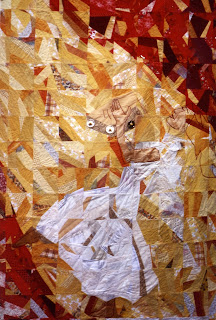 Joy
When I exhibited this quilt in the year 2000 in the world General Conference of my church in Toronto in the women’s hall, a lady came to me, asking me to publish the stories behind my quilts. Since 10 years now, I carry this demand with me, and – sorry lady, I am late – now I will give you those stories, step by step: Stories of my life experience: 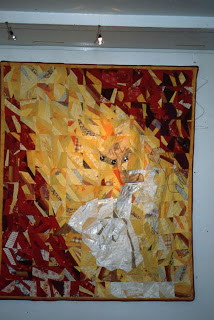 When my brother called me – and asked for a quilt, which will express Joy – my mind started running like a machine. Dr. Guenter Preuss is a Director for a classical orchestra with choir in our church in the south of Germany, and he intended to hang some quilts expressing the songs and the music. One of the big themes he had chosen was joy. Joy? Me? I just went through hell in my family life! Abuse in my family, divorce because of dependency… as a mother I was asked to give more than I was able to give and often I asked God to take some burdens from me. I experienced the slavery of a life in a family, where dependency took over all parts of the life. Everybody who had been in such a situation he/she knows, what I was suffering and where we went through – me, the bigger family, as my relatives, and the church family, too. Yes, I had a strong God, waking me up by thunder-voice in the middle in the night. This voice was like thunder and hall: “Brigitte, stand up and go out!” First I refused and was angry at this voice, which woke me up, when I desperately needed sleep, but then I followed the order, I saw the whole truth … I woke up from a terrible blindness, and God showed me the whole disaster, which forced me to act according to the terrible reality: protect my kids, - divorce, … don’t ask me for more details.
And now I got the order for that quilt: Joy! Which person in the bible could be able to understand me? Only Miriam came into my mind. She is a woman. She lost her little beloved brother, she had to give him to the daughter of the pharaoh, which I know now, must have been Amenophis II. His daughter, Hatschepsut, was younger, than Miriam at that time, when they met beside the river Nile, that’s why they could communicate in such a nice way together. Sure: Miriam, as a 12 years old girl, saved her brother’s life – yes – but which price she had to pay? Her brother rose together with Hatschepsut … far from her home. She learned in early life to pray, to pray and to pray. That’s how she became a prophet! 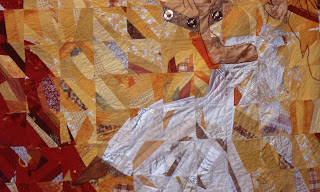 Who did better express joy in the bible, than Miriam? My inner eye began to see her: Dancing at the Red Sea side. At the East side! Just shortly before, they had been in deepest depression, so that her brother screamed to God! “Save us!” The mountains in their back, the Red Sea in front of them, and the only way out – there was the hating “brother” of Moses: Thutmoses III, with his army. This king just came back from a battle in South Turkey (Land of the Hittites), when his son and Co-Regent Amenophis III told him, they had to let go Moses and his folks. If Thutmoses III would have been at home in his palace, Moses would rather die in the desert, than to meet him! That’s why he refused God’s order to be His prophet in front of the king of Egypt, and said, he wouldn’t go, that he couldn’t speak, he has a heavy tongue … short: he was afraid to death! He knew better than any Egyptologist today, how much Thutmoses III admired his aunt Hatschepsut, and how much he hated Moses – who had the most beautiful love-story in the world with her! (I saw the picture of Moses and his brother Aaron in his tomb: His name was Senenmut in Egypt!). I love that story, that Senenmut had a brother, who was Priest; that Senenmut never used his tomb. That Moses did run away and meet the fat Queen in Ethiopia is also mentioned in Jewish historical books, the Talmud. Anyhow:  Moses and Aaron only went to meet the Co-Regent Amenophis III (called Pharao in that text in the bible, while his father Thutmoses III is mentioned shortly as the King). When Thutmoses III heard that message that his son let run away Moses and his folks away, while he was absent in a war, let’s get that king in range. Thutmoses III turned his army and just met Moses and the Isaelites (probably in the area of nowadays Nuweiba – the only place that fit that description in the bible) beside the Red Sea.
When Moses yelled at God, God smiled and asked Moses: “Why do you shout so loud?” Sometimes God is really humorous! Moses enemy to death is behind God’s cloud and they wants to kill them, first of all Moses/Senenmut! Ok, we admit, there was the cloud in between. But – anyhow, imagine! And God asks him that question??? Not only that one, there was also a Sabbath, which supposed to be held now! What? Mountains, Water (nobody had Scuba-Diving stuff to see the corals), in the face of the death, they should keep quiet, don’t shout and scream to God, and hold Sabbath??? O Moses, o Miriam! (When I was tour-leader in Egypt, I often told the travelers that story in front of Hatshepsut Temple, and some of them had seen Senenmuts tomb. Always at the end of the story I asked them: “Would you love to keep Sabbath quietly in that situation?” It was really funny to see their reactions: “O no! Never! How?” (Most of them were Sunday-keeper or unbelievers.)
We know the exactly date of the death of Thutmoses III: It was a Sunday. But the reason for his death is never mentioned in his tomb at the far end of the Valley of the Kings in Thebes/West, Luxor, Egypt. Why? Because it was a shame! How often I was there and meditated about that miracle of God!
And how often I was sitting in Nuweiba at the seaside, and listened to God’s miracle, that this was the place of the exodus … Exciting – just when you know the end. But how would I feel, if I was myself in Moses and Miriam’s skin??? No – thank you. I would prefer to keep my own problems. I don’t want to be in their situation there!
Everybody knows the story, how God divided the Red Sea. There was a Hippie, and he was sitting in Brussels at a corner and screamed: “Praise the Lord, who let go 2 million Israelites through the red Sea!” There was a pastor coming along, and explained him, this was not a miracle from God, it was just knee deep water, so they could easily go through the water there … Very satisfied with himself, how he “converted” this stupid young man, this pastor left. When he turned at the corner, he listened the same voice, rejoicing loud: “Praise the Lord, who killed the whole egyptian army in a knee deep water!”
So now I had this order from my brother: JOY! It must be Miriam – after crossing the Red Sea and being safe in the area of nowadays Saudi Arab or Jordan.
What a joy! What a storm of praise! What a thunder of emotions among the people! 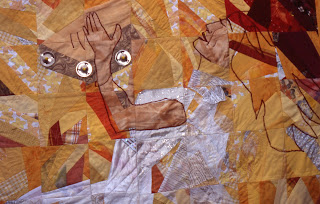 Those who oppressed them for over 425 years, are dead now and the former slaves are saved!
Unbelievable!
How could I express this joy in a quilt? The style I found very quick: Crazy.
The color: Red for love and joy, and yellow for the light – coming from God- the fire of God, the fire column at night, in which was Jesus himself, as written in the bible.
But how I paint Miriam, when she was dancing? By luck I found a picture from the Hippie-time mentioned above: A lady sitting on a motorcycle, in the days, when police didn’t prove, if you wear a helm.
She was so happy, so much enjoying her windy experience, and was laughing, holding her head back, her hairs flying in the wind, as much as the silk-scarf did. And so I had found, what I was looking for: The expression of unexpressionable joy in a dance in front of God: Miriams dance!
Later I sent this quilt to a Quilt show, I think it was in Houston. Those people sent him back, because my frame was not perfect enough. Oh – sorry Ladies, I was sooo busy with the expression of my feelings, that I forgot to be perfect (which is not my favorite character…)

My new shop in DaWanda!

Brigitte Brenda
Since I am 12, I am studying art, painting and drawing. I wrote books, and did live several years in the mother of art-countries, egypt. When I raised my 3 kids, I sewed nearly all clothes myself, I learned sewing in school, and from my mother, she was a tailor. Since 1995 I am Quiltmaker: I just learned the traditional style, which I found, was necessary, but changed veray quick toward contempory art. I learned from international teachers to express myself with materials, painted them, draw, and worked with airbrush. In a lot of single- and groups exhibitions in germany and all over the world I could show my quilts. The Quilt "Hatschepsut" won a price in Austria. This Quilt went along with "Roots of Racisme" through North-America until Pakistan. My quilt "Mime" was a cover on a Patchwork-Gilde journal. In a Patchwork-Gilde meeting, Helmbrechts, Germany, I had a single exhibition inside a church, which had 4000 visitors. For my brother, who is a musicians, I worked out Quilts like "Joy", "Prayer" or "Jesaja". They hang over the orchestra in several concerts in South-Germany...